This sharp increase was driven in part by the implementation of mandatory minimums for drug offenses, starting in the 1980s. These laws demand strict penalties for all offenders in federal courts, no matter the extenuating circumstances.

The Obama administration took some measures to roll back these mandatory minimums. In 2013, Attorney General Eric Holder issued a memo asking prosecutors to prosecute crimes with mandatory minimum sentences only for the worst offenders.

Earlier this month, however, Attorney General Jeff Sessions rescinded that memo and issued his own, which requires prosecutors to “charge and pursue the most serious” offense. The punitive sentiment behind Sessions’ memo is a throwback to our failed experiment in mass incarceration in the 1980s and ‘90’s.

The rise of mass incarceration

According to political scientist Marie Gottschalk, mass incarceration took off in three waves. 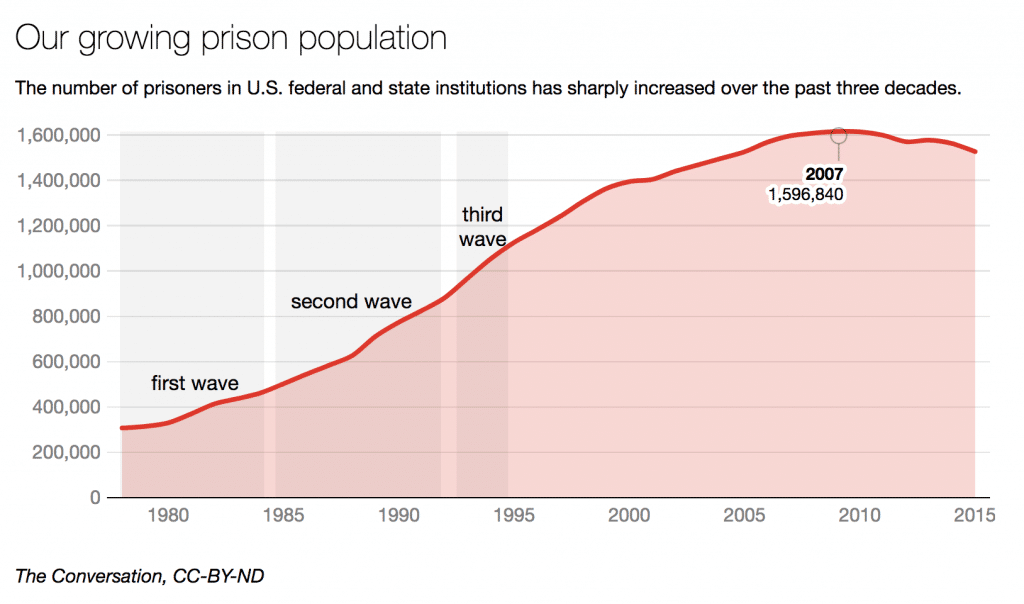 First, in the mid-1970s, Congress began to lengthen sentences. This culminated in the 1984 Comprehensive Crime Control Act, which established mandatory minimum sentences and eliminated federal parole.

Then, from 1985 to 1992, city, state and federal legislators began to lengthen drug sentences. This was the heyday of the war on drugs. It included the Anti-Drug Abuse Act of 1986, which imposed even more mandatory minimum sentences. Most significantly, it set a five-year mandatory minimum sentence for offenses involving 100 grams of heroin, 500 grams of cocaine or 5 grams of crack cocaine.

Two years later, new legislation added a five-year mandatory minimum sentence for simple possession of crack cocaine, with no evidence of intent to sell. Before then, one year of imprisonment had been the maximum federal penalty for possession of any amount of any drug.

The third wave hit in the early 1990s. This involved not only longer sentences, but “three strikes laws” that sentenced any person with two prior convictions to life without parole. “Truth in sentencing” policies also demanded that people serve their full sentences. This culminated in the Violent Crime Control and Law Enforcement Act of 1994, which included a three strikes provision at the federal level.

Notably, these laws were passed during a time when crime rates had begun a precipitous decline. Today, more than half of U.S. states have a three strikes provision.

By the end of the 20th century, there were an unprecedented over two million inmates in the U.S. That’s more than 10 times the number of U.S. inmates at any time prior to the 1970s, and far more than most other countries. 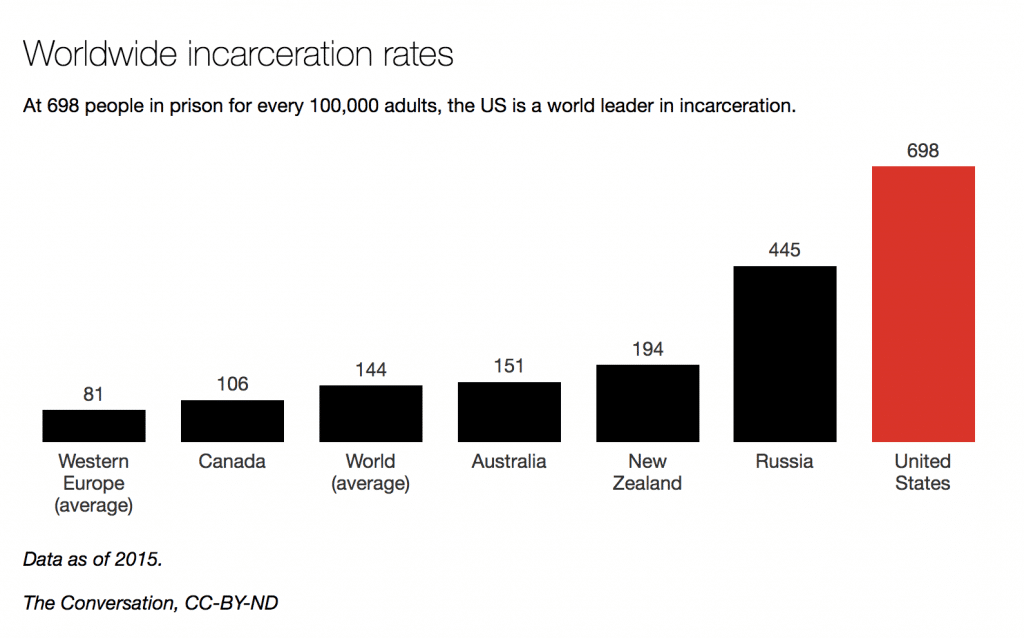 The beginning of the end

Although the current incarceration rate is still high – about 1 in 37 adults – it is at its lowest since 1998.

Imprisonment has decreased over the past decade for two reasons. First, policymakers have started to realize that punitive laws do not work. Second, states are no longer able to continue financing this massive carceral system.

The Great Recession in 2007 gave elected leaders the political will to make cuts to the prison system. After three decades of prison building, many states found themselves with massive systems they were no longer able to finance, and began to release some prisoners to cut costs. This was the first time in 37 years that the number of prisoners went down. By 2011, one-fourth of states had closed or planned to close a prison. 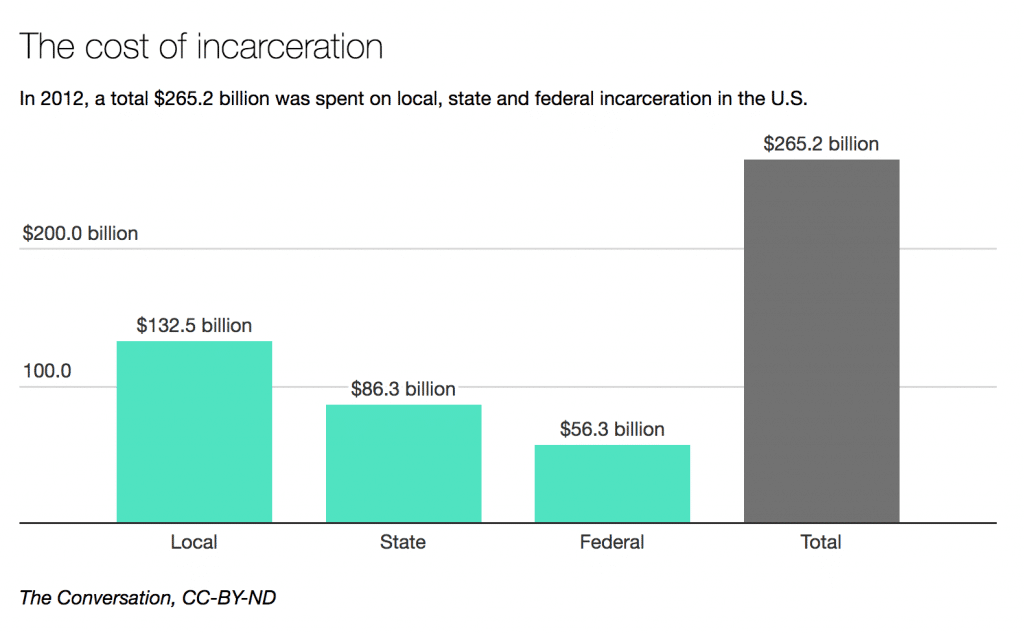 In 2010, Obama signed the Fair Sentencing Act, repealing the five-year mandatory sentence for first-time offenders and for repeat offenders with less than 28 grams of cocaine.

This change reduced the 100-to-1 sentencing disparity between crack and powder cocaine down to 18-to-1. Activists had been demanding this reduction for decades, as the only difference between the two drugs is that crack is made by adding baking soda and heat to powder cocaine. Despite similar rates of crack usage in black and white communities, in 2010 – the last year of the 100-to-1 disparity – 85 percent of the 30,000 people sentenced for crack cocaine offenses were black.

In 2012, after years of steadily increasing prison admission rates, the number of new admissions to federal prisons began to decline. In 2015, just 46,912 people were admitted to federal prison – the lowest number in 15 years.

When mass incarceration first started ramping up in the 1970s, violent and property crime rates were high. However, even after crime rates began to decline, legislators continued passing punitive laws. In fact,
some of the most draconian laws were passed in the mid-1990s, long after crime rates had gone down. Incarceration has had a limited impact on crime rates. First of all, it is just one of many factors that influence crime rates. Changes in the economy, fluctuations in the drug market and community-level responses often have more pronounced effects.

But incarceration continued to rise even as crime fell, in part because of the public’s demand for a punitive response to crime. Although there is less crime today than there has been in the past, most people are not aware of this drop.

Thus, the fear of crime persists. This often translates into punitive public policies – regardless of declining crime rates and the inefficacy of these laws at preventing crime. 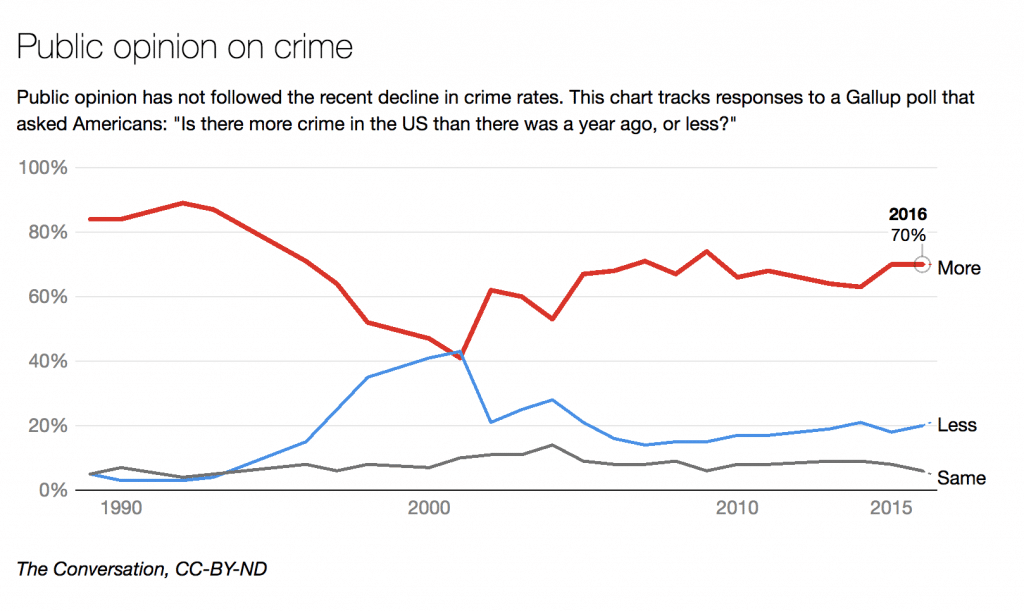 Since the election of Richard Nixon, politicians on the left and right have learned that fear-mongering around crime is a surefire way to get elected. Today, when crime rates are at a historic low, politicians continue to stoke the flames of fear. These strategies may win elections, but the evidence shows they will not make our communities safer.

This article was originally published on The Conversation. Read the original article.

Tanya Golash-Boza is a Professor of Sociology at the University of California, Merced. She has published five sole-authored books and 35 articles and book chapters. Her latest book Deported: Immigrant Policing, Disposable Labor and Global Capitalism was awarded the Distinguished Contribution to Research Book Award from the Latino/a Studies Section of the American Sociological Association.