It’s a kind of poetic justice: Insulin helped make Alex Azar rich. And Eli Lilly’s insulin price-fixing could bring his confirmation for Secretary of Health and Human Services crashing down.

On Wednesday, Azar, a former bigwig at Eli Lilly, sat down with the Senate Health, Education, Labor and Pensions Committee for what could have been a quick and dirty confirmation hearing. Azar is Trump’s pick to run HHS, a Cabinet position that would make him Regulator-in-Chief of the very industry in which he made his millions.

But whatever Azar expected, it probably wasn’t getting roasted by everyone from Sen. Rand Paul to Sen. Elizabeth Warren, all calling him out for tripling the price of insulin during his time heading Lilly’s U.S. division.

It’s hard to imagine such an emphasis on insulin just a few years ago, but drug prices have exploded into a major national issue, with overwhelming majorities of Americans officially fed up with the system that allows Big Pharma to price-gouge them into bankruptcy – or worse.

The problem of Big Pharma’s insulin cartel has finally reached a tipping point.

Now, three formerly-untouchable corporations have been thrust into the spotlight, with five states, a federal prosecutor, multiple class-action lawyers, thousands of diabetes patients, and high-ranking senators all gunning for their monopoly over this century-old, life-saving drug. Novo Nordisk, Sanofi, and none other than Eli Lilly are being accused of price-fixing scams that kept their profits high, their middlemen happy, and priced insulin out of reach for too many folks

And even if Alex Azar becomes Big Pharma’s “inside man” in the White House, that might not be enough to save them this time.

To understand why Eli Lilly and the insulin mafia are especially worthy of a take-down, you have to know insulin’s backstory. The drug was first manufactured in 1921 by a Canadian trio led by Frederick Banting. They sold the patent to the University of Toronto for a symbolic $1 apiece; they thought the deal would make drug corporations price the drug reasonably.

But pharmaceutical corporations aren’t doctors, and even back then, they had none of the integrity that Banting’s team did. Because less than 30 years later, in 1941, three corporations had been indicted for insulin price fixing. Among them was, believe it or not, Eli Lilly.

Lilly was being accused then of the same thing they’re being accused of today: getting together with their so-called competitors and agreeing to hike their insulin prices at the same time, to the same levels, for over a decade.

The same pattern emerges with Novo Nordisk’s Lantus and Sanofi’s Levemir. Between Levemir’s release in 2006 and 2014, the price of the two drugs went from about $66.96 a vial to nearly $249 a vial, and the increases match up almost perfectly.

Overall, the three corporations have raised their prices more than 240% over the past decade, with prices rising frequently in lockstep. 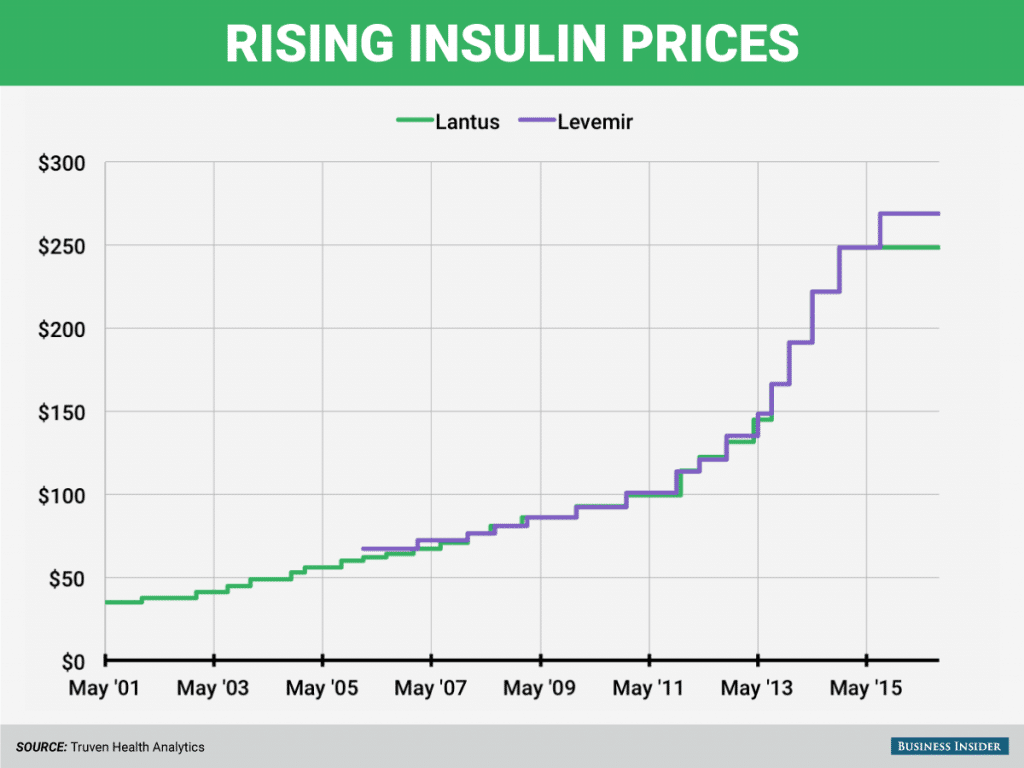 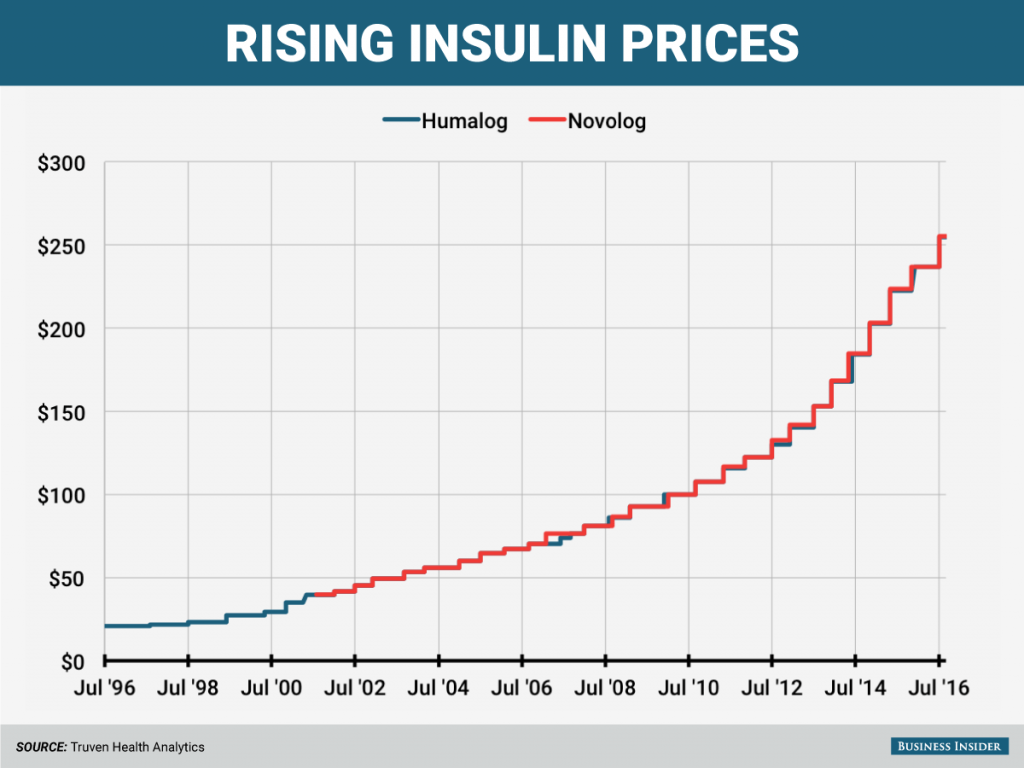 It’s true that it’s not illegal for me to see a competitor hike their price and then make the same hike myself, as disgusting as that would be when you’re talking about a life-saving drug my company didn’t even invent. But what is decidedly not legal is for me to get on the phone with a “competitor” and agree to hike our prices at the same time.

So while these corporations are trying to claim that they’re just keeping up with the trend, that’s extremely difficult to swallow when you see the same price hikes on the same day. How would that even be possible without some shady deal-making? Is Eli Lilly employing psychics? Does Sanofi have an internet connection to the future?

All of this became just a little too egregious, and in the last few years, the outcry against this highway robbery has gotten too loud for Big Pharma to ignore. Azar, during his confirmation hearing this week, knew better than to try to deny there was a problem. “Drug prices are too high,” he said. “The President has made that clear, and so have I.” This coming from the man who personally presided over Lilly’s U.S. division as they tripled the price of their insulin products? Sure.

Most regular people who’ve been struggling to buy insulin for years already knew this was all a scam. But what’s changing now is that our lawmakers are starting to see it too. Sens. Bernie Sanders and Elijah Cummings, for example, have gotten together to demand a full-on federal investigation into this price-fixing. Meanwhile, at least five states and a federal prosecutor are also demanding explanations from the insulin racket, and a class action lawsuit against the three corporations was filed earlier this year.

The senators want to see some heads roll, and it’s not hard to see why. This collusion has a body count. With increasing frequency, patients and their families are taking desperate measures to get the insulin they need. Little boys and girls whose parents have turned to black market insulin; young people self-rationing, going longer and longer between injections to make the vials last; patients even intentionally slipping into ketoacidosis, a life-threatening condition, so that they can get free insulin samples in the ER.

This could be the beginning of the end for Big Pharma. The whole “free market knows best” argument goes up in smoke when you look at the insulin racket. Drug prices are rising five times faster than wages. Pharma’s reputation is in the proverbial toilet. We have to start demanding some real accountability here: a high-level Congressional investigation into Lilly, Sanofi and Nordisk, one that ends in three CEO’s put in the back of cop cars.

People are dying, so someone should pay. Period. If we can sustain this outrage, then whether we stop Azar or not, this could mean the end of the insulin monopoly — and the rest of Big Pharma can be next.

Dude who tripled price of insulin nominated to regulate price …

Caitlyn is a rabble-rouser and writer based in Olympia, WA. She is a copywriter and logistics specialist for Tiny Pixel Collective, a web shop providing activists and artists with the tools they need to tell stories that inspire change.