This is the story of one of the 7 undocumented youth that were arrested on December 15th in the office of Florida Rep. Carlos Curbelo. The author has been in jail since then and continues to remain there until Congress passes a Clean DREAM Act. At every point of authority since his arrest, he has faced the system that has traumatized people of color and immigrants for years and denied giving his name in order to bring the struggle of DACA recipients to light.

In addition to the sacrifice and putting his body on the line, the young people have gone on hunger strike. The risk of detention and deportation is real. Monday night, it was confirmed that ICE has been alerted to the case. Every day they remain in jail is a higher deportation risk for the Dreamers putting everything on the line to win what their community deserves. He explains here why he has taken this stand.

I was born in Morelia, Mexico but raised since I was 4 years old in Homestead, Florida.

As a DACA recipient, I applied in 2012 around my senior year of high school and was lucky enough to fall into that description of what a DACA recipient was. Which meant I was brought here at a very young age, have lived continuously since I can remember, went to school here from kindergarten through high school, and even some of college. I have really just fallen straight into that DREAMer narrative. 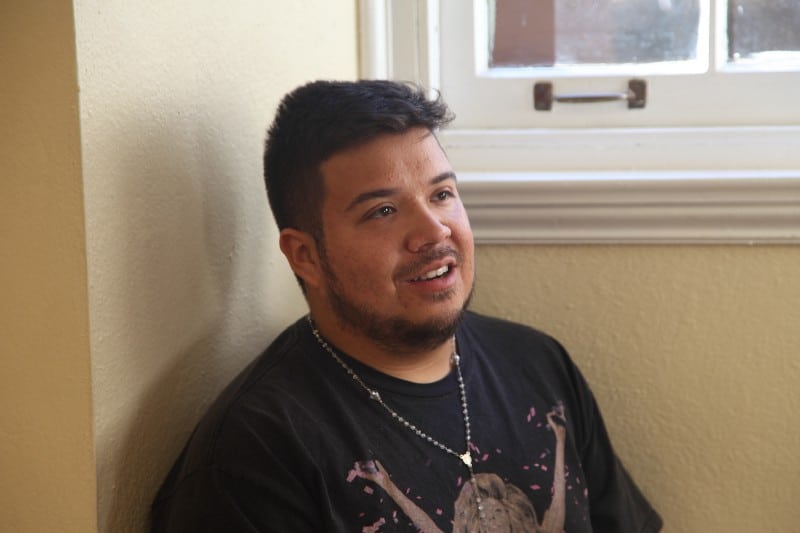 When does your DACA expire?

My DACA expires the last day of February 2019. I was able to renew it in December of 2016, so I couldn’t renew it again once it was rescinded on September 5th. But it leaves me with around 400 days until it expires.

There have been attempts of passing a DREAM Act since 2001, how does it feel to be continuing the fight for a Clean DREAM Act now in 2017?

I have heard about the DREAM Act as long as I can remember — since I was a child. It is a subject that our community constantly talks about. Our youth are seen as our future.

It has been a glimmer of hope. Some form of promise that has always been made to me but has been constantly rejected.

The DREAM Act is just a way for me as a young person to gain some type of protection, permanent protection. Which for me — is different.

For me the end goal is permanent protection, where my parents can take the oath of citizenship next to my brothers and sister. Permanent protection is where we don’t have to be afraid to go out at night or interact with the police. It is just taking that fear away from us. Having us live in peace. Which is all we want — to be like anybody else. I didn’t know I was undocumented until I was 13 – I thought I was just Mexican and living in the US.

It makes me feel like we are not being taken seriously. Like they think it’s a problem, but that it’s like a leaky roof: only an inconvenience. But this is not something that can be rescheduled and rescheduled. This is serious. These are people’s entire lives.

My sister couldn’t renew her DACA. She couldn’t fall into the window given after it was taken away. Hers expires March 6, just one day after the cutoff. When she loses it, she loses everything. My brother has 2 children who have to be supported. If he loses his DACA he loses his work permit and his ability to provide for his family. Politicians need to understand that this is a crisis. It is not only the lives of those who have DACA that are being affected, but entire families and communities that are living in fear of being torn apart.

The severity of it has been very understated. And I feel like those stories aren’t being shared. There are people that are scared. I am scared that once my DACA expires, ICE will be knocking on my door.

Yes, I may have been born in another country, but I don’t know that country. I do not know the culture. No matter what my Mom and Dad tried to teach me, I don’t think I would assimilate. This just shows how much they don’t care about us.

What would you say to the people who put their faith in the politicians to bring a solution to this?

I would say to them that — you need to question that way of thinking. Since 2006, politicians have constantly been coming into our communities, driving through our neighborhoods, smiling at us and been telling us not worry and that in one or two years we will be taking the oath of citizenship. Promising my parents that they are not going to be afraid anymore. Yet, whenever we try and hold them accountable it is a slap in the face. They don’t represent us; they usually always represent where the money is. No matter what we want to think, our community is not as powerful as a lobby.

Don’t put your hope in someone just because you’re given these promises. It has always been this way. It’s always been “we’ll protect you,” but when we need the protection the most, they disappear. It’s scary that they are willing to put our livelihoods on hold. To have that much complete blind trust, it is scary.

What brought you to the point where today you’re ready to take direct action?

There was a moment in my household that kind of sent shivers down my spine. My Mom and Dad were talking to each other. Saying that they were feeling disappointed and betrayed. It was unprecedented to see my parents express that much emotion. My father broke down in front of me, saying that so much sacrifice has been put in but he still constantly sees his children struggle to survive with money, and not being happy, being constantly under attack by politicians, and they both broke down and started crying. They said they were done, and that every day they were an inch closer to packing their bags and packing up and leaving back to Mexico.

Seeing their dreams completely crumble in front of them was very hard for me. I don’t show many emotions but I do feel everything in my heart, and I feel that I need to do something because I don’t want my parents to feel like their dreams and sacrifices were in vain. By taking this action, I can show them that I saw the sacrifice they made for me and that no matter what, even if I have to fight tooth and nail, that I will protect it and keep their dreams alive. Even if that means I will have to sacrifice a little bit of something. Even if it’s my freedom. I want my family to never think that their dreams are going to completely vanish anymore. I want them to get the dignity and respect they deserve.

Right now you are preparing yourself to be on a hunger strike during your time in jail. How do you feel, and where will your mind be during this time?

I am a little bit nervous. I always like to think that no matter how determined we are there’s a little bit of fear. It’s not a bad thing, we’re human.

The most fear I have is not having control of my actions and having to be constantly moved around, not having my own freedom. I know the risk. I know that I may be taken into ICE custody. If I do get taken in, my biggest fear is for my parents and family. It will be seeing them worry about me and my safety, and knowing that they’ll be so saddened by it.

Yet, I believe that my determination overpowers that. If I do this, I can change something. Even if it means polarizing people into asking themselves: “Will you protect yourself, or will you deport yourself?”

This is something I owe my community, and something I owe my parents and my family. For anyone, it is pretty difficult to imagine being in jail for a week or more. I truly believe that this is something I have to do, that the time is now. Now has always been the moment — back in 2016, 2015, 2007, I’m tired of waiting. I know my body will suffer a lot of emotional stress and pain. I’m prepared for that. I have exercises I do to ground myself and remind me of why I am doing this and who I am.

My body, I know, will feel pain from the hunger. But I am willing to do this. If my parents suffer every day in the sun, as farmworkers, if they suffered crossing here, then… I think that my body is ready to feel some of the pain that they felt. My hope is to put it to use that they will benefit from one day.

I want to just tell the world and the public that this is not about a bill or an Act. People’s lives are not bills. People’s lives are complete worlds that need to be protected. It is so vital to not believe that people are all completely bad, and that we must take action. We have to fight for our DREAMs, and for our lives.

Support The Seed Project here, and keep up with the hunger strikers on Facebook.

This piece was originally published on Medium.