I nearly spilled hot coffee all over myself this morning reading that professional pretty boy (and Canadian Prime Minister) Justin Trudeau just spent billions in taxpayer money purchasing Kinder Morgan’s Tar Sands pipeline. Once a poster-boy politician, who promised a new type of politics, he will be remembered as a two-faced, back-stabbing, climate hating, Indigenous rights-ignoring, oil industry shill who just blew billions of hard earned Canadians’ tax-dollars on a Texan company, formed from the rump of Enron. Yep, you read it right. That’s billions, not millions of dollars in corporate welfare to a private oil company that wants to fry the climate in a project that even its own investors don’t want to invest in.

Earlier today, Trudeau’s Liberal government announced it will buy Kinder Morgan’s controversial Trans Mountain pipeline and the infrastructure related to the expansion project for $4.5 billion of tax-payer’s money. But early indications are that that does not include the expansion costs, which could add a further $7.4 billion to the bill. That’s a serious amount of money. Oh, and it doesn’t include the costs of cleaning up a spill, either, where the company could face fines of billions too.

Trudeau’s Finance Minister, Bill Morneau, announced details of the hugely controversial agreement reached with Kinder Morgan at a news conference at the National Press Theatre in Ottawa. “Make no mistake, this is an investment in Canada’s future,” Morneau said.

Instead of forging a clean energy future, Trudeau’s Government has just embraced the dirty polluting past and broken promises he made to the Canadian people. The pipeline is hugely contentious as it would triple the amount of tar sands to be transported from Alberta to the British Columbian coast. It is vehemently opposed by the Government of British Columbia, First Nations, local community and environmental groups.

As the Canadian Star points out, Trudeau is a politician “who said pipeline projects need ‘social licence’ to proceed and who championed consultation with Indigenous people”.  Trudeau could have shown true climate leadership and scrapped the project. But he is in the pocket of the oil boys, just like so many politicians before him. Kinder Morgan has no social license to operate and Trudeau has just trampled on the rights of the local Indigenous community too. He is also investing billions in a pipeline that many financial analysts believe is not viable, and it could even become a so-called stranded asset.

Indeed, with a timing that is deeply ironic, just as Morneau was speaking, Reuters was reporting that Britain’s Royal Bank of Scotland “said it had tightened restrictions on project finance and general lending for high-carbon energy projects” and “it would no longer directly finance” investments in the tar sands. So the bankers are pulling out their money just as Canada’s belligerent politicians are risking the cash of Canadian tax-payers.

The reaction to today’s news has been particularly swift and brutal: “When the CEO says ‘it’s a great day’ after selling a project, the buyer should worry.” said Stewart Phillip, Grand Chief of the Union of BC Indian Chiefs. 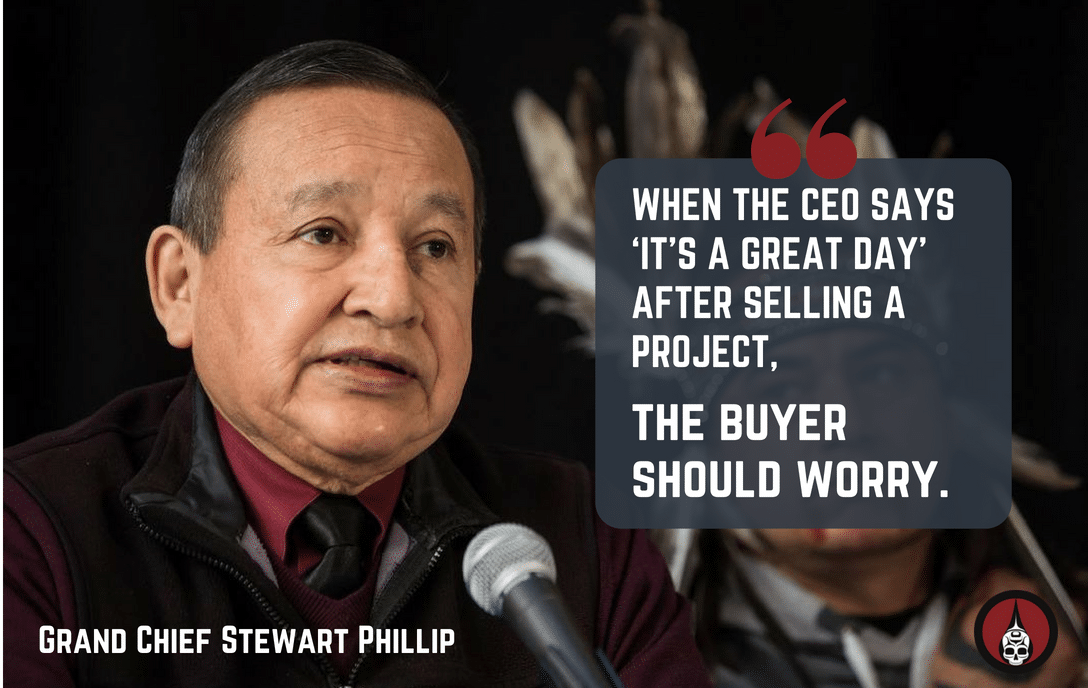 Writer and activist, Naomi Klein tweeted: I hope @JustinTrudeau knows that this decision is going to haunt him everywhere he travels in the world. Movements fighting for real climate action and Indigenous rights are everywhere. His days of getting out of Canada to bask in the adoring selfies are over.

I hope @JustinTrudeau knows that this decision is going to haunt him everywhere he travels in the world. Movements fighting for real climate action and Indigenous rights are everywhere. His days of getting out of Canada to bask in the adoring selfies are over. #StopKM https://t.co/ZrsM3lghir

Weighing into the debate on Twitter, Eric Reguly, the European bureau chief of The Globe and Mail said: “Canada’s climate change policy was always a fraud. You can have the oil sands or you can have a credible climate plan. You can’t have both and Canada chose oil.”

Canada's climate change policy was always a fraud. You can have the oil sands or you can have a credible climate plan. You can't have both and Canada chose oil.

Hannah McKinnon of Oil Change International added : “Prime Minister Trudeau is not a climate champion – he is a shill for an industry that knows its days are numbered. This absurd miscalculation threatens the climate, jeopardizes the economy, and strips Canada of its commitment to First Nations rights and any remaining credibility it had on climate. This pipeline will not be built, but Trudeau’s legacy as a disgraced climate leader is set in stone.”

The Canadian Green Party Leader Elizabeth May, who just pleaded yesterday to criminal contempt for protesting against the pipeline, tweeted that Kinder Morgan is “laughing all the way to the bank”.

Finally, Will George, Tsleil-Waututh member and spokesperson for the Coast Salish Watch House in a statement. “The cost that they did not calculate in their $4.5bn purchase is that Indigenous frontlines will stop this pipeline.” He added that the First Nations “will continue to stand in the way of pipeline development, and I will continue to meet the responsibility passed on to me by my ancestors to protect the water and land”.

For anyone who can make it, there is an emergency rally tonight at 5:30pm in Vancouver:

Andy is a Contributing Editor for Oil Change International's Price of Oil blog. He is also a freelance writer and part-time Research Fellow specializing in environmental and health issues, and has written about the oil industry and climate change for twenty years.