For weeks, pressure has been building on poster-boy politician, Canadian Prime Minister, Justin Trudeau to see how his Government would respond to what is becoming Canada’s most pressing political issue, one that is, in the words of one commentator “threatening to rip Canada apart.”

Would his Government help finance Texas company, Kinder Morgan’s dirty Tar Sands pipeline from Alberta to British Columbia or instead would it listen to the likes of Al Gore and millions of others and withdraw support for the project, thereby helping protect the planet and respect Indigenous sovereignty?

And this week his Government finally announced their decision. Trudeau’s Finance Minister, Bill Morneau speaking at the National Press Theatre in Ottawa, said that he was prepared “to indemnify” the pipeline “against any financial loss” that derives from the attempt of legal action by British Columbia “to delay or obstruct the project.”

He added that “this indemnification would allow Kinder Morgan to finish what they started, what they received federal and B.C. provincial approval to do.”

So Trudeau’s Government has jumped off the fence and straight into Kinder Morgan’s lap, stuffing the pockets of their shareholders with cash. They are giving the Texans a “blank check” to burn the planet and also burn holes in millions of Canadian wallets in the process. And no one knows how big those holes could be. Meanwhile the shareholders of the company will bear little financial risk. They could literally be laughing all the way to the bank.

It is not surprising that the reaction from the pipeline’s critics was brutal: Jagmeet Singh, federal Leader of the New Democratic Party tweeted “Liberals are giving Texas oil company #KinderMorgan a blank check while dumping all the risks on Canadians… Rigged process, First Nations & local communities shut out, oil spill threats, science ignored & now billions on the line. It’s clear this pipeline should not be built.” 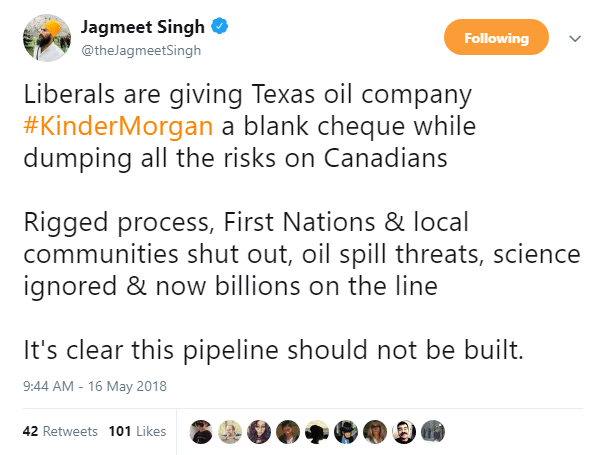 Grand Chief Stewart Phillip, president of the Union of B.C. Indian Chiefs, added “Canada cannot indemnify against the risks of not respecting Indigenous Title and Rights.”

Kinder Morgan’s new pipeline will triple the amount of dirty tar sands being transported from Alberta to the British Columbian coast and increase tanker traffic in the Puget Sound by 700%. Trudeau’s Finance Minister was speaking with two weeks to go before the self-imposed deadline of May 31st set by Kinder Morgan for the outstanding issues surrounding the pipeline to be resolved, specifically around finance liability for its shareholders and for the BC government and local communities to stop opposing the pipeline. Morneau said Trudeau’s government was “striving to get an agreement by the May 31 deadline.”

It’s not hard to work out how stupid, naïve and fiscally irresponsible Morneau’s offer of indemnifying Kinder Morgan is. As the Canadian National Observer pointed out, Trudeau has walked into a trap set by Kinder Morgan. He has just agreed to underwrite a pipeline that always lacked financial viability.

The National Observer goes on to say the “Trans Mountain pipeline expansion lacked commercial viability from the get-go.” The paper argues “It has required government supported handouts at every stage of development,” despite the fact it has put very little shareholder capital at risk.” It is “Kinder Morgan’s shareholders who should bear the cost of Kinder Morgan’s executive decisions — not taxpayers,” the paper states.

Moreover, the pipeline still faces numerous legal challenges from the BC Government and First Nations, all of these could ratchet up vast legal bills. And what about an oil spill?  Kinder Morgan could also face billions of dollars in fines if there was an oil spill which was its fault because Canada’s Pipeline Safety Act, enshrines the principle of “absolute liability” for oil spills from pipelines. Currently, Kinder Morgan’s insurance for oil spills is said to be “limited,” so Trudeau’s Government would pick up the large check for damage.

Stand.earth said the statement only “emboldened” those working to stop the project. “This is a desperate attempt by the Trudeau government to use taxpayer money to bail out a collapsing project,” said Tzeporah Berman, the new Campaigns and Communications Director of Stand.earth

As Jadmeet Singh notes, Trudeau is ignoring the science on climate.  He doesn’t have far to look. Just take the last month, in which the New York Times has warned about the Arctic being ice free by mid-century and the Washington Post warning about rising CO2 levels

“For the first time since humans have been monitoring, atmospheric concentrations of carbon dioxide have exceeded 410 parts per million averaged across an entire month, a threshold that pushes the planet ever closer to warming beyond levels that scientists and the international community have deemed ‘safe,’” noted the Post.

Katharine Hayhoe, a climate scientist at Texas Tech University, told the paper “As a scientist, what concerns me the most is not that we have passed yet another round-number threshold but what this continued rise actually means: that we are continuing full speed ahead with an unprecedented experiment with our planet, the only home we have.”

And that is why Trudeau’s unlimited cash handout to a Texas oil company should concern us all, not just if you live in Canada. He is giving them a blank check to build a pipeline that will accelerate climate chaos. In doing so, he is helping destroy the only home we have.

Andy is a Contributing Editor for Oil Change International's Price of Oil blog. He is also a freelance writer and part-time Research Fellow specializing in environmental and health issues, and has written about the oil industry and climate change for twenty years.